Kenwood car stereos are a popular choice for many car owners. They can be installed quickly and easily in most cars, and provide hours of entertainment when you’re on the road.

If you need to remove your Kenwood stereo from your vehicle, don’t worry! This article will show you how to do it safely without causing any damage. We will be discussing the different ways that you can remove a Kenwood car stereo and what tools are needed to get the job done. Note that flip-out head units require special care while removing to safeguard the display..

Technically, you only need the keys provided by the manufacturer. However, we find that these are often too small and delicate for the task at hand. If you want to ensure safe removal of your Kenwood car stereo without damaging it or hurting yourself, consider keeping a flat head screwdriver so that you can use that if needed.

2. Turn off the Car and Disconnect Battery

It’s always best to err on the side of caution and it is never a bad idea to turn off the car and disconnect your car battery before doing any work. This will prevent you from damaging the stereo system in the process of removing it.

Disconnecting the battery means, you need to disconnect the negative terminal of the battery.

Look for the screws holding your Kenwood car stereo in place. If you are removing an older model, these may be covered with a plastic frame that needs to be removed before you can get down to business. Use your fingernail or flat head screwdriver or another prying tool of choice to remove this cover and set it somewhere safe where it won’t get lost.

Once you’ve completed the previous steps, it’s time to get down to business and remove your car stereo from its place in the dashboard!

Most models have a faceplate that needs to be pried off while some models can directly be detached from the car using the Kenwood keys provided with the stereo system.

5. Slowly Get it out of Dash Space

Slowly and carefully get your Kenwood car stereo out of the dashboard. The plastic material may be a little brittle after years of use, so it is important that you don’t rush this step or apply too much pressure to avoid cracking or damaging the device.

And it has wires at its back connected to your car, if you apply too much pressure while getting it out, you may tear some of those important wire connections.

As the system is out from the enclosure, you’re now one step away from completely separating the stereo from your car. Take a photo of the wire connections on your phone so that you can easily connect those when you are putting it back in.

After taking the photo, disconnect the wires carefully. As said earlier, after years of use, the plastic connectors can be brittle. So, be gentle while applying pressure.

How to Remove Kenwood Car Stereo without Keys?

After several years of use, many people lose the keys provided by the radio unit manufacturer. If you’re one such individual, don’t worry! You can buy an aftermarket key set to remove the device.

We strongly recommend using a key, whether it’s from the manufacturer or an aftermarket one, to safeguard the device. Using the wrong material inside the keyholes can cause the system to be damaged. 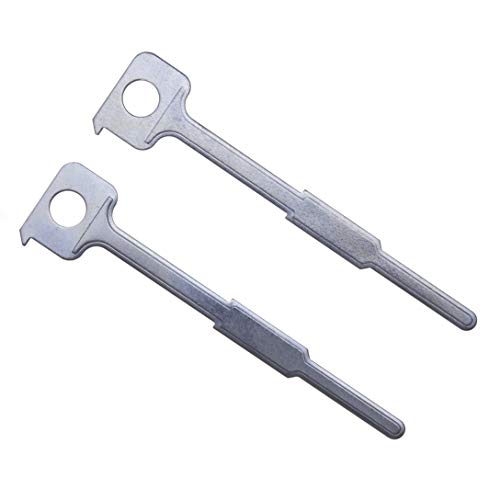 However, if you are taking the risky path, here is a step by step process on removing the Kenwood car stereo without using keys-

As I have described above, the first three steps need to be performed as usual. This means, turning off the car, disconnecting the negative terminal of the car battery, and removing the plastic frame around the stereo system.

2. Use a Metal Piece that’s Similar to the Keys

Then find the keyholes of your Kenwood car stereo. If you are not able to see them from outside or from inside, then there is a possibility that it may be a little deeper in the dashboard and needs some extra effort for removal.

You need to use a flat metal piece that has a similar shape to a key. You can use those like the keys and try to remove the stereo. It may take a few efforts before you actually be able to complete the task here.

And be cautious while applying pressure with the metal piece, you may damage the stereo unit.

3. Detach the Stereo and Disconnect the Wires

Then detach the unit carefully and slowly. If you’re not careful enough while doing so or applying too much force could result in damaging your device.

Once the stereo is detached, disconnect the wires carefully. And take a photo of it before disconnecting to make sure that you can easily connect them back when putting it back in place.

Whether you’re into a stereo system upgrade or want to modify things in the stereo space in the dash, you’ll need to remove the stereo from the car.

While the process is fairly simple with a pair of original keys, it may become a hassle if you lost those. We recommend buying a pair of aftermarket keys or finding a friend who has a similar system and has the keys to assist you.

When you do the job, make sure you disconnect the battery and carefully disconnect the wires from the stereo so that it doesn’t get damaged in the removal process.